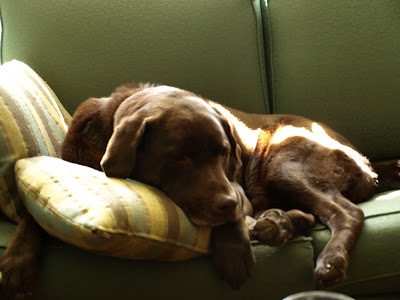 moz hasn't been walking right ever since the day after my birthday party when we were playing with him and a balloon. he loves to jump and snap at them. the next day he didn't use his leg at all (the one that just had surgery last year) and so we were hoping he just sprained something. no such luck. he now has a luxating patella (knee cap that pops out) on the leg that JUST had surgery 6 months ago. it is the same surgery that he had on his other leg when he was one. he's not quite six and will need his third surgery. we are really torn (no pun intended) about what to do this time. the surgeon recommends surgery, of course, but he never really recovered fully the first time around and he already has arthritis in all legs. plus the risk of going under again scares me and another 2 months of recovery will be hellish. but he's only 5 and hopefully has at least that much time left and if we don't get the surgery it means only very short walks and no running, jumping and all of the things he loves to do. it is a hard decision. and we don't know what to do. and are hoping that his new thing will not be tearing something twice a year! but one thing is for sure, he is on a diet again. he gained 5 lbs in the last couple months. what a tub of love.
so does anyone have any advice about what you would do?
Posted by brandeye at 7:13 PM