Perhaps someone gave you a beautiful bouquet of flowers and you're not quite sure what to do with them. Or maybe you have learned the importance of having fresh flowers around to admire and brighten your day, so you bought them for yourself.

These flowers were bought from the grocery store. Starting at the left we have carnations (which I think are highly underrated), tulips and some greenery. Since it was the day before Valentine's day, the flowers were at least 50% more than they usually are. 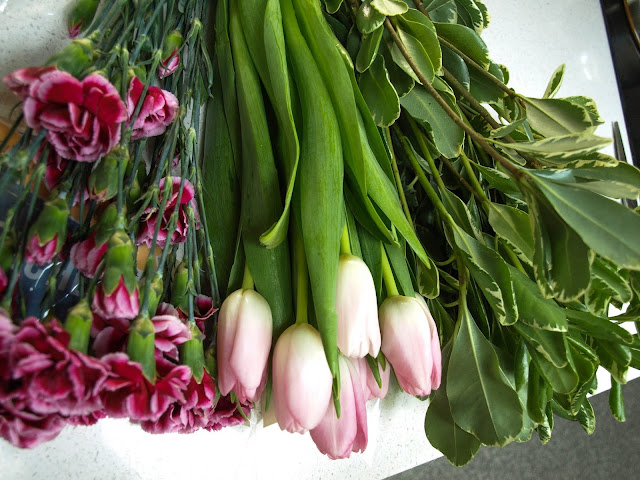 Start by picking out some vases or any type of container that would work as a vase. I started with the following: a milk glass pedestal vase, a marble wine cooler, a milk glass cup and a milk glass vase. Unless you have a very large vase, the amount of flowers in a large bouquet (or 3 small ones as shown above) usually look best as smaller arrangements. 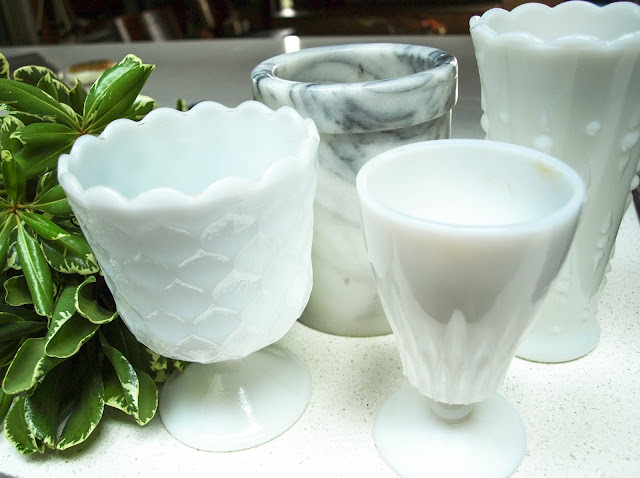 Start by placing the foundation of the arrangement. This is best accomplished by using the sturdiest plants first, i.e. some type of filler. Think outside of the box if needed and (if it's not the middle of winter) raid your garden. In the past I've used hosta leaves, evergreen branches, ferns, and a number of unknown plants from my yard. 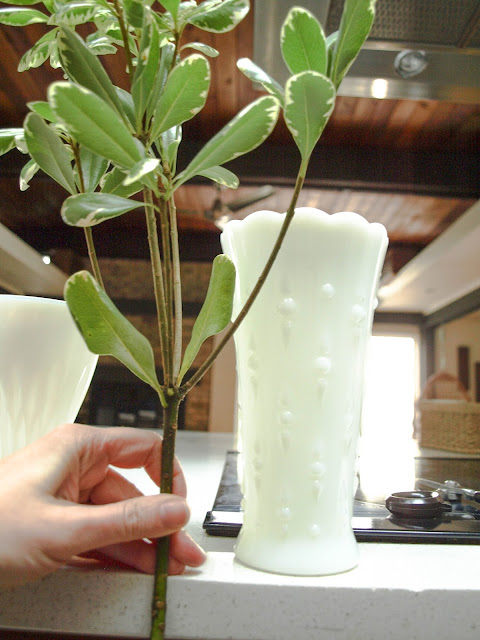 Eyeball the level of the plant and where it will best align in the base, as shown above. Make sure to tear off any greenery or leaves that fall below the water line. If they are in the water it will make the water turn gross faster. 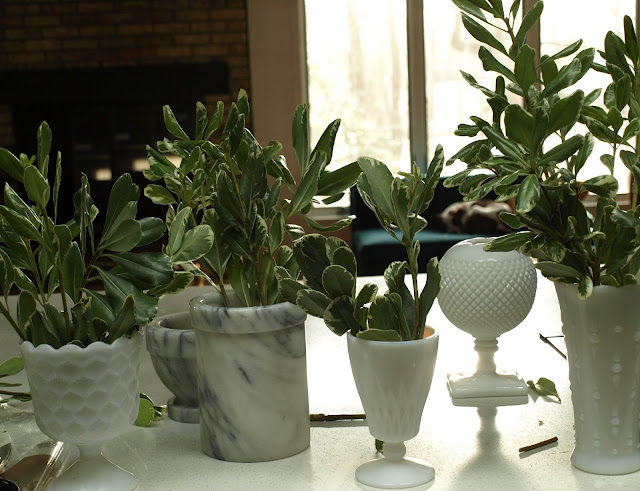 After the base is set, follow the same procedure to place the flowers. Eyeball which part of the stem to cut by placing the stem in front or beside the vase and seeing where it would work best in the arrangement. 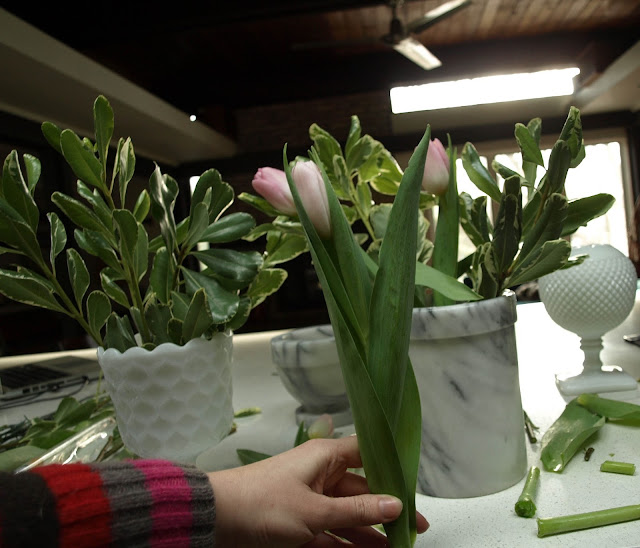 You can mix and match different kinds of flowers into one arrangement, or stick with one flower type per vase. 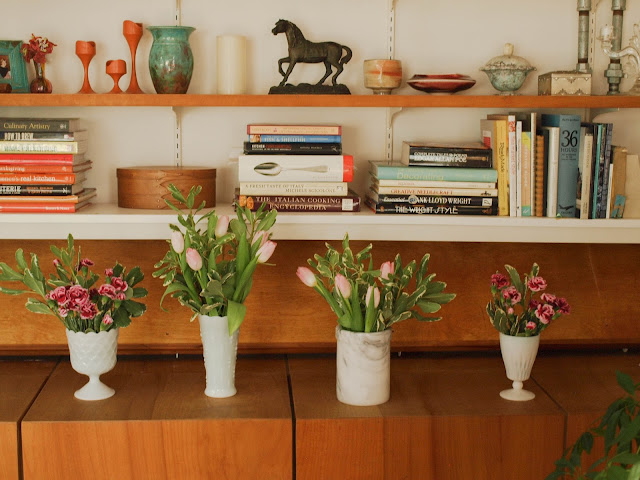 I decided to keep it simple and made two tulip arrangements and two carnation arrangements. 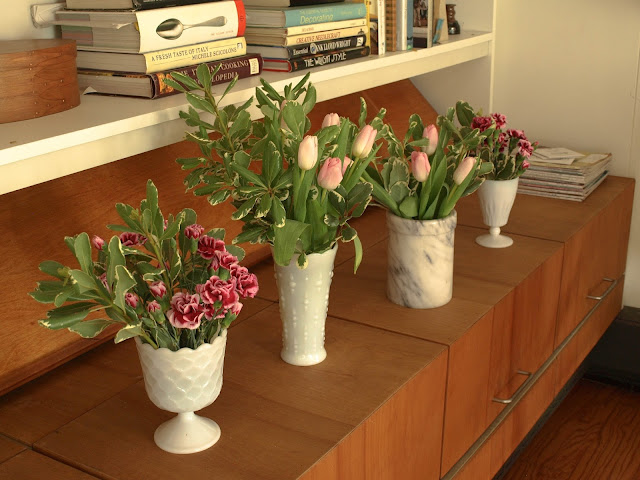 Just as I was finishing shooting the above flowers, my lovely husband came home with the beautiful bouquet below. He wasn't as cheap as I and bought them from a proper flower shop. 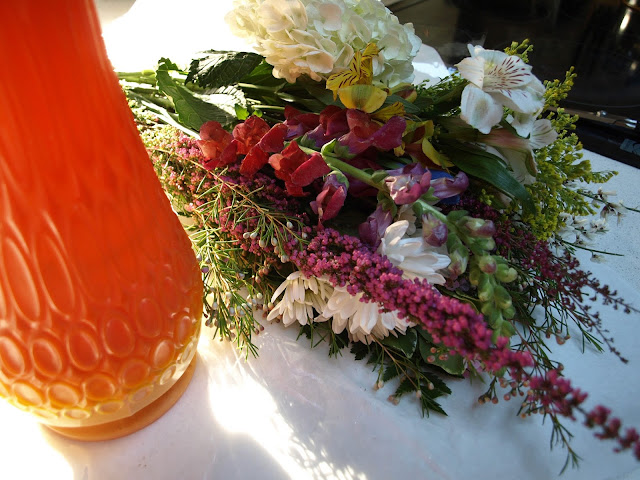 Since this was a large, awesome collection of different types of flowers, I thought it would work best as one large arrangement. But there was enough to make one large and one tall.

For wide vases, use scotch tape to divide the area into sections, as shown below. You can divide the tape lengthwise to get two pieces per piece. 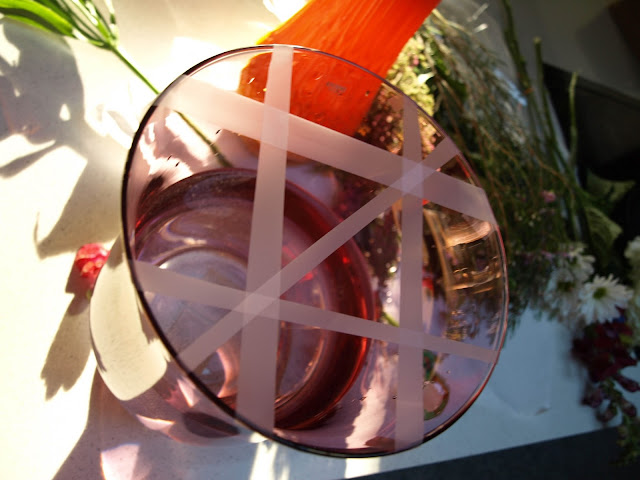 Start with the largest, sturdiest flowers as the  base. Then add the flowers to fill the spaces. Vary the heights somewhat, so give it depth. 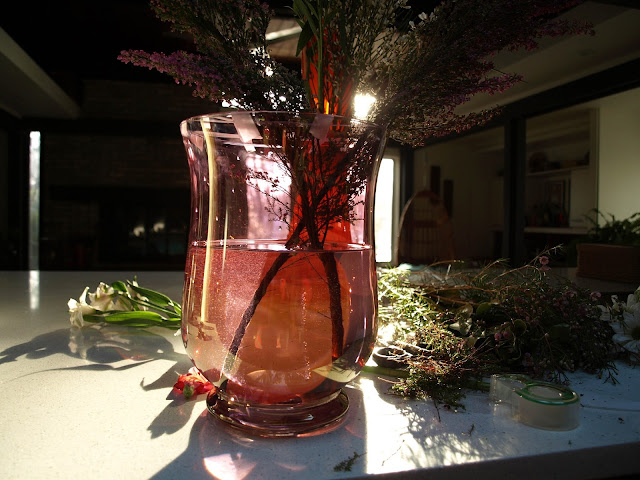 And here are the finished arrangements. The vase on the right is one of my faves from my vintage collection. 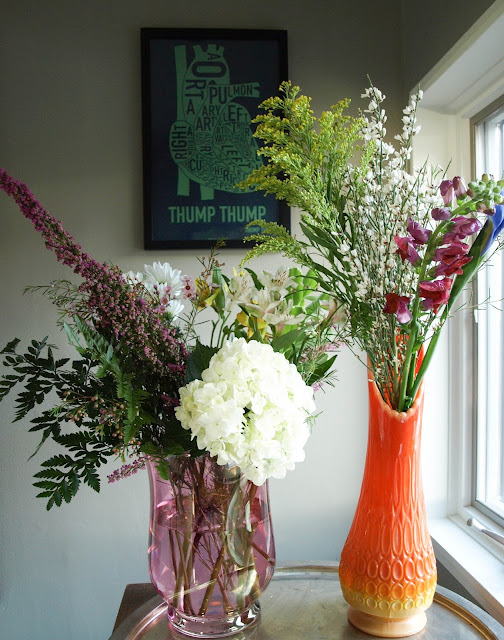 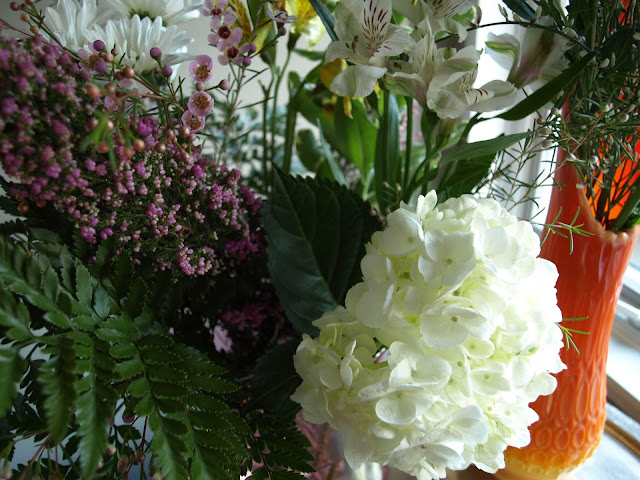 Happy Valentine's Day!
Posted by brandeye at 8:13 PM No comments:

Dave and I took an amazing long weekend trip to Iceland in the beginning of January. It was so much fun and even more incredible then I imagined it would be.

This was Hallgrimskirkja, don't ask me how to pronounce it 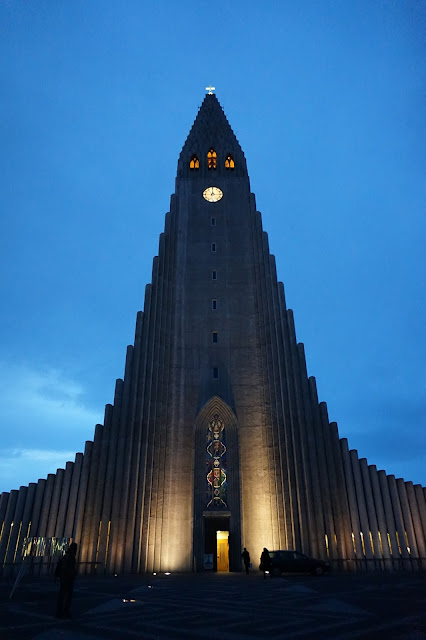 It was by far the most ornate building that I saw while we were there. The architecture was very modern and simple and I loved it. I will devote a future post to the architecture and design. 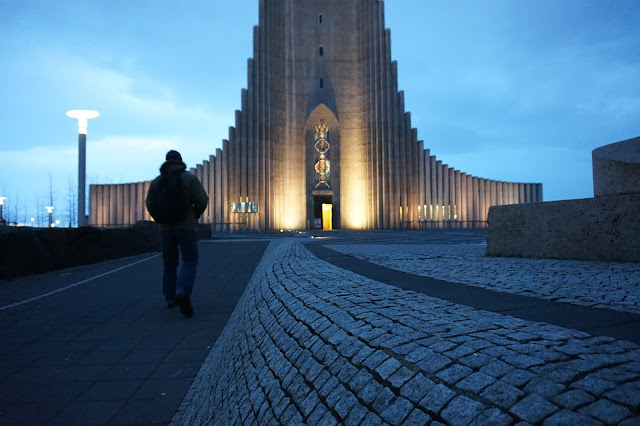 Read more »
Posted by brandeye at 9:16 PM No comments: