Last week we went on a last minute vacation to Maine and it was awesome! It had been on our list of places to go for some time, and we finally made it work. We booked a super rad house rental and spent a few days exploring the beautiful state. 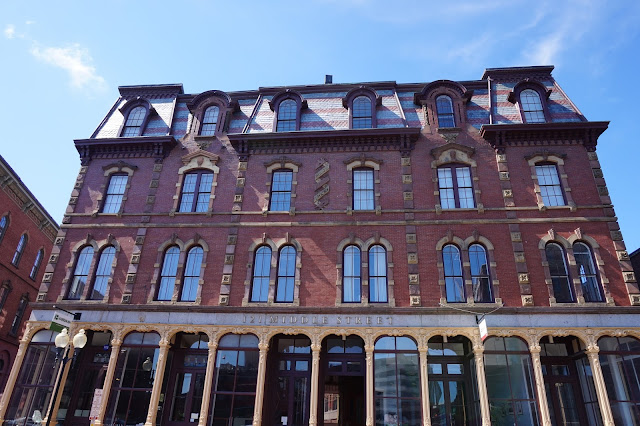 I didn't know it was here, but am very glad that I stumbled upon the Angela Adams store in Portland, ME. The design studio is based out of Portland and their showroom was divine. The rugs and furniture were beautiful. I even dug the taxidermy hawk that you can see in the background. 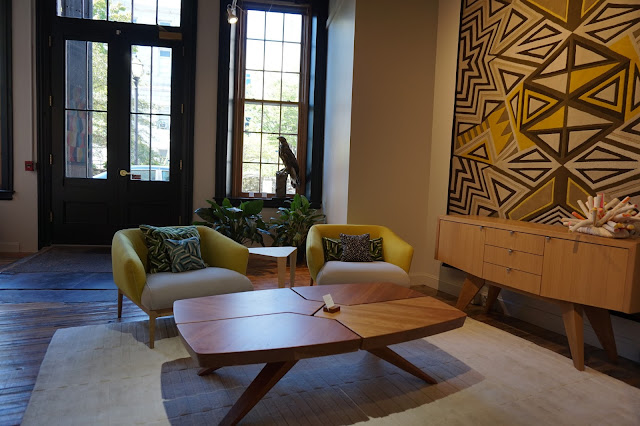 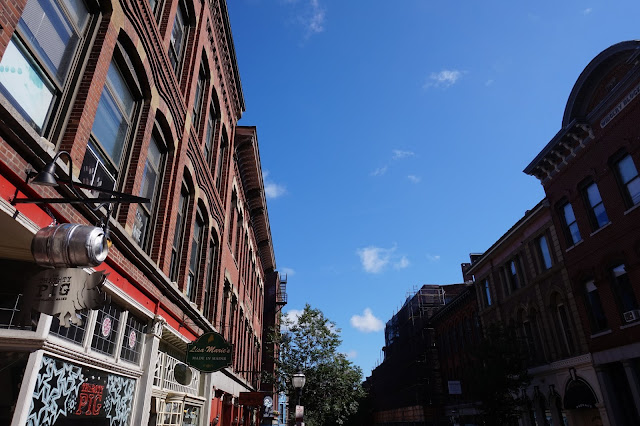 We also made a stop at the Holy Donut. They make them out of potatoes, which is interesting and made for a heavier donut, but it tasted great and wasn't as heavy as you would imagine. They only had one flavor left, chocolate sea salt, but it was superb. I'm also very glad that I painted my nails for this picture; I hardly ever paint them. 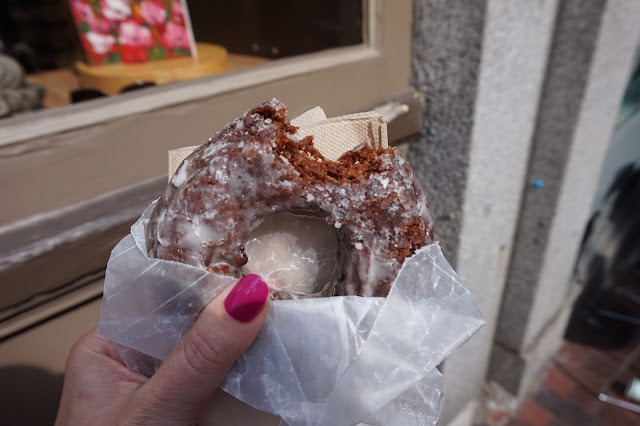 We also had some killer oysters at Eventide Oyster Company. They had this large rock embedded into the bar to display the oysters. It was so cool and the oysters were delicious. 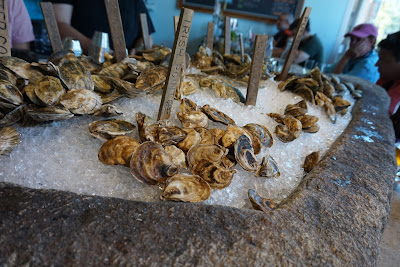 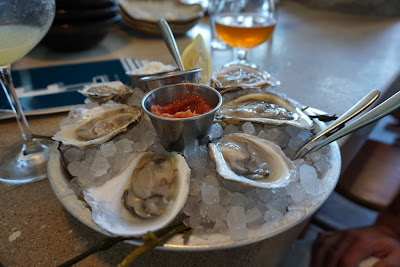 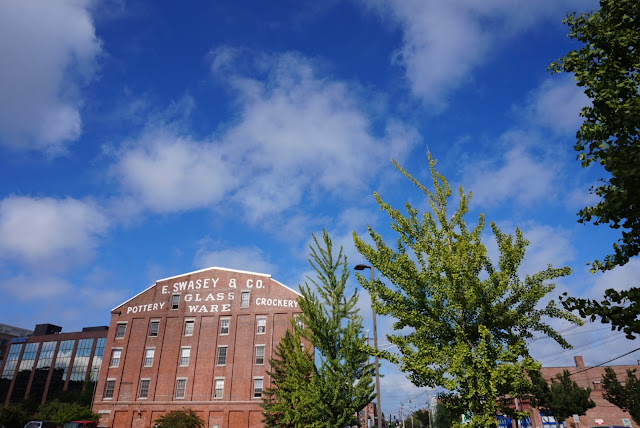 The weather was perfect for the whole trip. 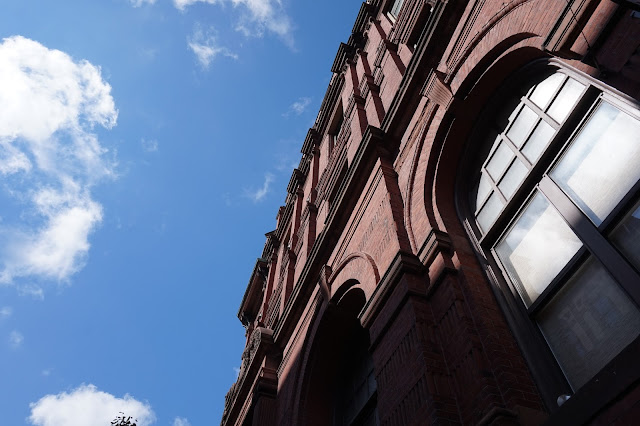 The house we rented was located in Wiscasset, ME, which was a super cute tiny town which just so happened to be famous for the most delicious and famous lobster roll. It was the first dinner of the trip and was pretty much the only thing open in Wiscasset for dinner (Red's Eats). Everything closes really early in Maine, at least where we stayed. Anyway, the lobster roll was gigantic and had probably about 2 lobsters worth of meat in it and no filler. It was basically two very delicious lobsters on a roll with butter for $24. We had many, many lobsters on this trip and they were the best. 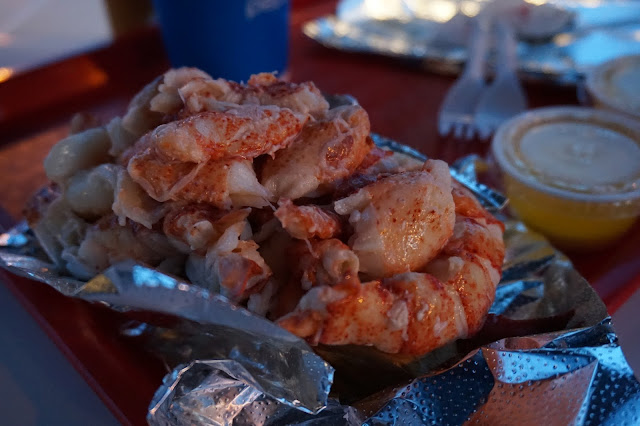 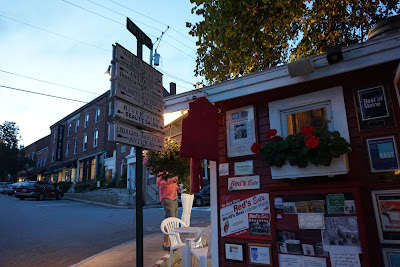 The view from the town of Wiscasset at night. 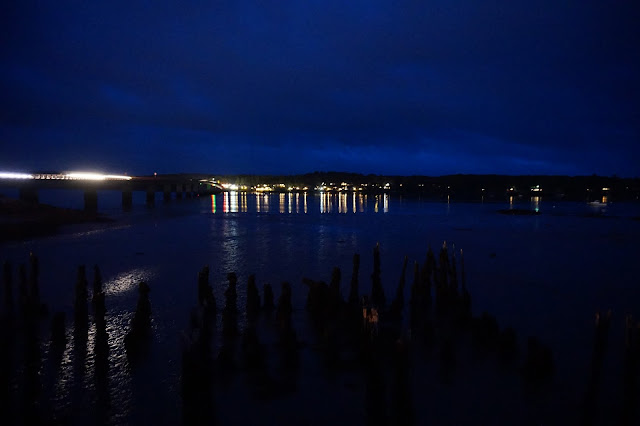 Below was the view where I ate yet another lobster. Imagine that. These colorful things that you see everywhere are bouys. Each fisherman has a different color and pattern on his bouy to mark where his lobster traps are located.  Maine is serious about lobster. It is seriously EVERYWHERE. I ate it probably two times a day and greatly miss it. 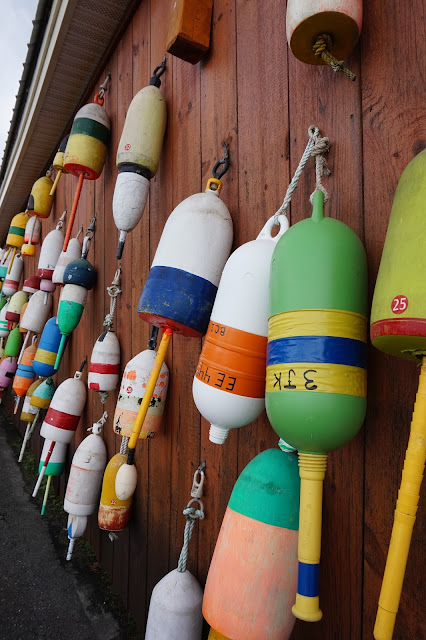 We took a day trip to Bar Harbor and Acadia National Park. Since it was a pretty far drive (2.5 hours) we didn't have much time to spend there, but we did get to see how beautiful it is. We plan to take another trip to Acadia at some point and will explore more of the park. 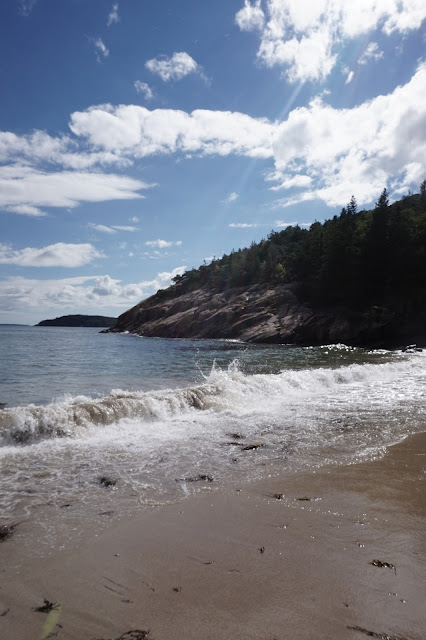 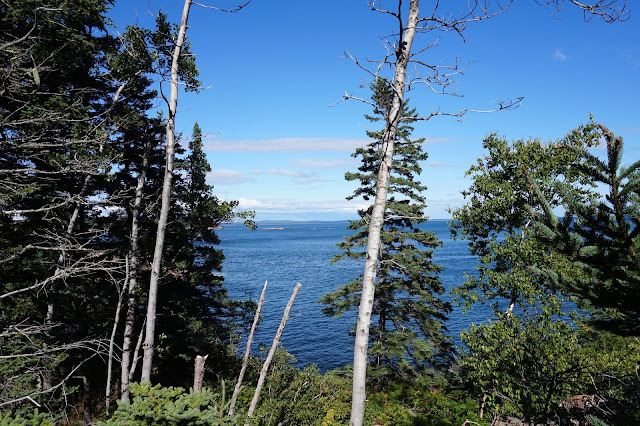 Most of the coast of Maine is rocky and picture perfect. 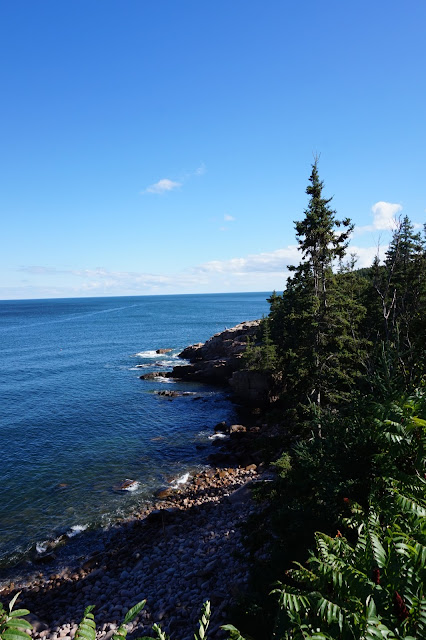 We took a sailing trip on a sail boat. We found a small boat that takes a group of a max of 6 people on an old wooden sail boat. They are called Sail Moscongus and the boat is the Sarah Mead, sailed by Captain Randy. We dodged a bullet when we arrived to the dock and found a family of 4 with two small kids who were crying and were not into being on a boat at all. The boat captain talked them into taking a separate trip after ours, hoping the kids would not be as upset. So we lucked out and had the trip all to ourselves. And the kids were cool (aka, not crying) when we returned, so it worked out for everyone. 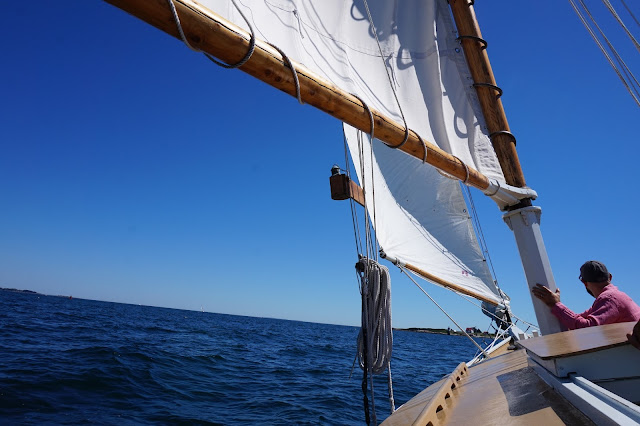 This is an awesome lighthouse on an super small island, but I forget what it was called. 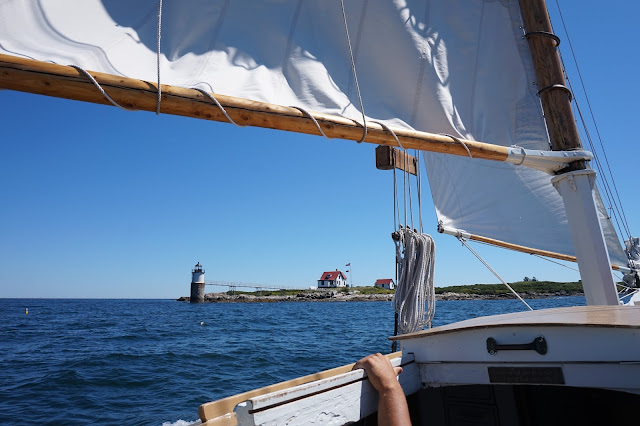 I would also like to point out that I felt like the biggest poser while on this boat. I have two sailing themed tattoos and am not a sailor. Ha. Once I realized this, I felt like I had to keep making sure my thighs were 100% covered and not exposed. But this also made me realize that I do need to finally learn how to sail and they have lessons right in Philly. So hopefully that actually happens this fall. 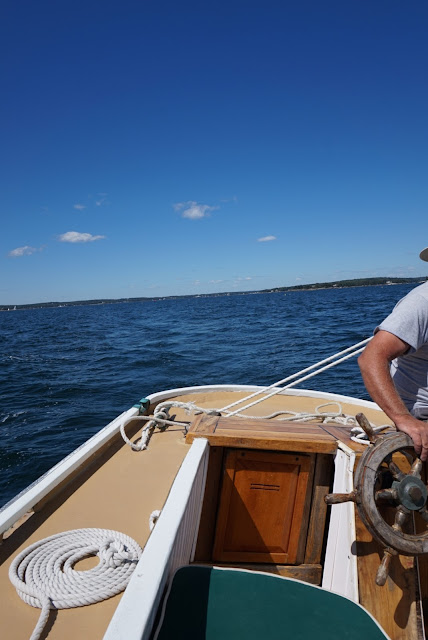 We sailed all around Boothbay Harbor, which was so beautiful. Each town was prettier than the next on the whole trip. 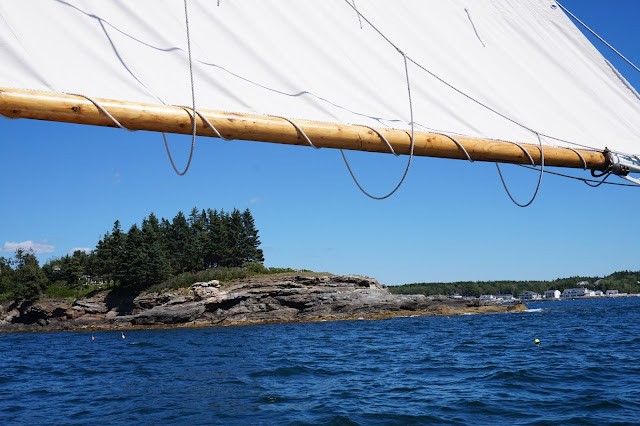 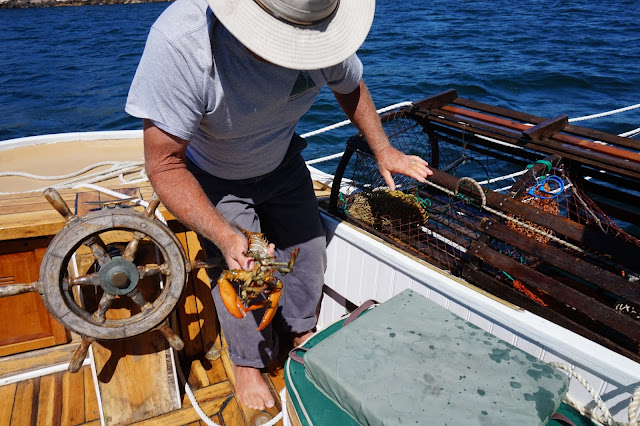 The coast of Maine is so, so beautiful!. And the water is so, so cold. 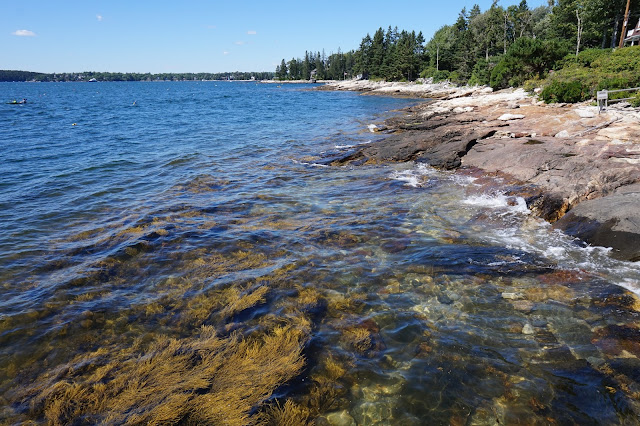 Here was our view from spot in town at Boothbay Harbor. The place was not great, so I will not recommend it. But who cares when you are on vacation, and this is the view. 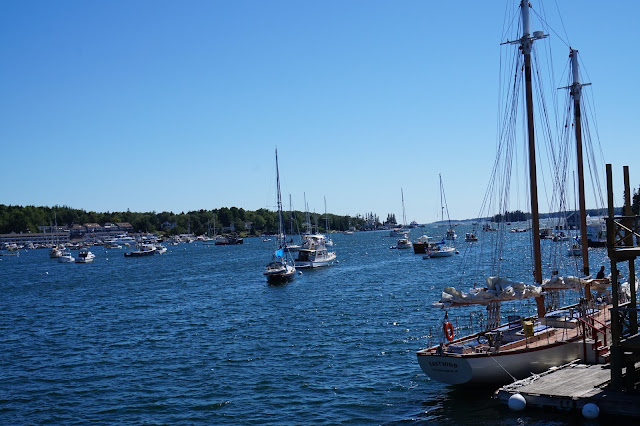 There is a tiny house in the middle of the bay. A walking bridge goes across the bay, and right in the middle is this house. No one lives there now, but they used to. How cute! 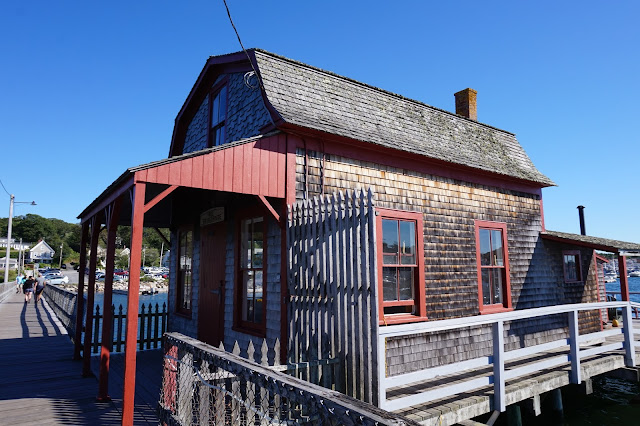 And here is the very cool house that we rented. It was located in the middle of nowhere and surrounded by the forest. It was so awesome! It's solar powered and the amount of stars that you can see at night will take your breath away. Here's the rental listing. 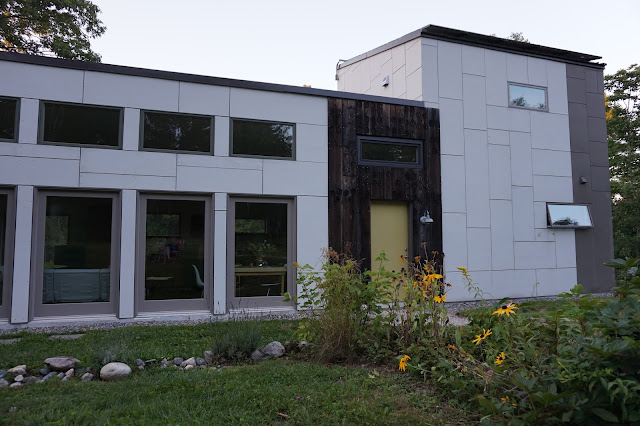 This house was a pleasure to stay in. It was perfect for us and had the best views out of all of the windows. 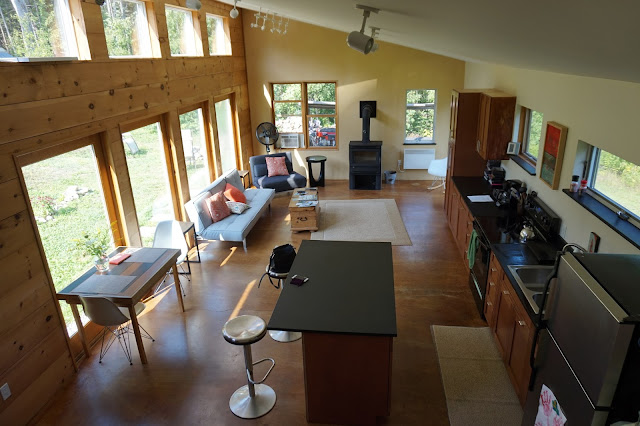 They had a vase in the cabinets, so of course I had to fill it with some wild flowers from the property. 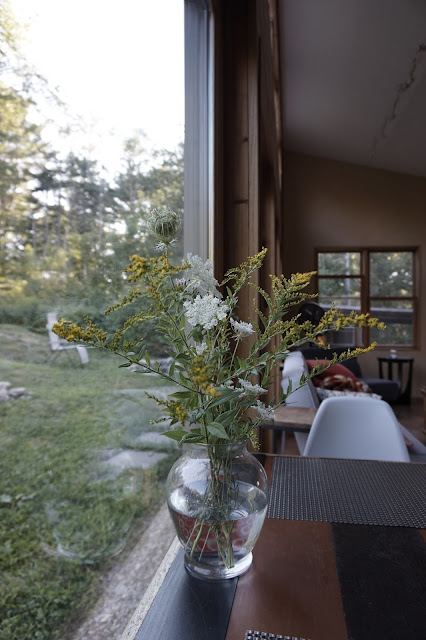 I completely lucked out and on our way out of town Wednesday, there was a flea market that had so much great stuff! I wish I would have bought more things! 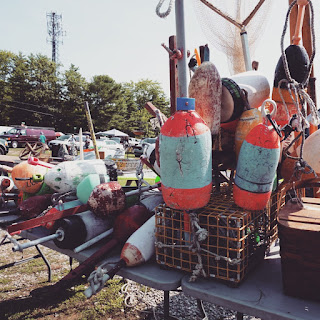 But there is always next time. We'll just have to go again and flea market shopping with be at the top of my list.
Posted by brandeye at 9:47 PM